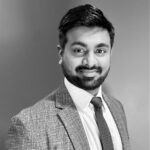 Yogesh Mudaliar is currently a Research Investigator at Takeda Pharmaceuticals, where he supports the lyophilization development of live microbiomes, monoclonal antibodies and antibody drug conjugates.
After obtaining his Pharmacy degree, Mr. Mudaliar gained valuable professional experience in various pharmaceutical departments such as a science executive, in marketing, advertising etc. However, Mr. Mudaliar’s passion for R&D drove him back into grad school where he obtained his M.S. in Biological Sciences from University of Massachusetts. After graduation, Mr. Mudaliar obtained a position at Merck Millipore as a Bioanalytical Scientist, where he developed chromatography methods and performed characterization studies for biologics. He subsequently joined AstraZeneca as a Formulation Scientist gaining experience in formulation, process development and large scale manufacturing of lyophilized and liquid biological products from early through late stage development. His work on particle formation due post-lyophilization stability issues in monoclonal antibodies won him the Thomas Jennings award at the ISLFD 2016. Concurrently, during his time at AstraZeneca he also completed a professional learning course on Biotherapeutic Formulations from MIT.
In 2018, Mr. Mudaliar joined Takeda Pharmaceuticals as a Research Investigator, to provide technical leadership for formulation development and lyophilization of LBP, antibodies, ADCs and fusion proteins. Currently, Mr. Mudaliar also serves on the company’s millennial advisory board to the CEO.

We use cookies to ensure that we give you the best experience on our website. If you continue to use this site we will assume that you are happy with it.Ok